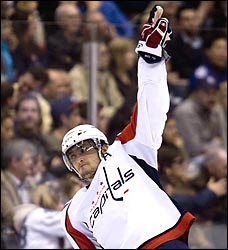 After three quick Ranger's goals I thought "They left the Caps too much time to mount the comeback". After the fourth goal I felt they were defeated. After the debacle in Philly could you blame me? But then, one of the most improbable goals Ovechkin will ever score knuckle-balled its way past Lundqvist like a guided missile.

Ovechkin, who's game is ballistic by nature, took that to mean that he could bring the team back.

I'm sure if you're the Rangers, you'd have to feel like you've put in a good night's work when you jump out to a 4-0 lead. It's only natural to let off the pedal a little bit. But with one curve ball of a goal, the snake-bitten road team became charmed.

The force of will that one player had was enough to inspire a team and simultaneously lift them to unreasonable results. (Did you hear the cheering from the crowd when he tied the game? I think we're gathering a following out there!)

There are two things I've said consistently all season long. 1) Never count the Caps out of a game, and 2) Alex Ovechkin is the Captain of the Washington Capitals.

Clarkie, its way past time for you to pass the mantle.
Posted by Nation's Capital at 7:27 AM

Yup, I agree, this is Ovie's team now. Clark was a great captain though, especially during those tough season when Ovie was a rookie/sophmore. But now it's very clear, Ovechkin is the leader of this team and while I appreciate Clark's services, Ovie deserves the C and Clarkie should respectfully take an A.