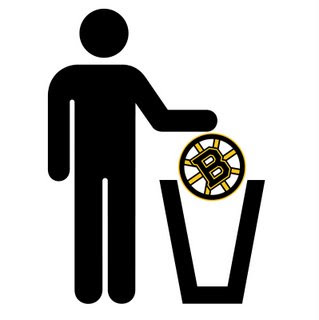 In the last meeting between Washington and Boston, it was essentially the Bears topping the Bruins. This time the Capitals get a crack at it.

Look out Bruins, this Caps team isn't another one of those cup-cakes you've been feasting on this year. (Maple Leafs, Islanders, Senators, Southeast teams...) The Caps will be a much tougher test for Boston, without a doubt. And I'm quite sure the home crowd will be in full throat to reinforce that.

This game is one of those that Caps fans have circled on the calender. A win for the home team would shrink Boston's lead in the conference standings to less than a handful of games. In fact, as the standings currently sit, the Bruins are the only team to chase. With so much season left to play, it sure would be nice to see the Caps perform a little reality check on the Bruins as to what the level of competition is this year in the East.

Side note: Ever have a friend/acquaintance who was a die hard Bruins fan? I did. Aren't they some of the most pompous and obnoxious people on Earth? For this exact reason I've always had an extra ounce of bile for Boston.

Side side note: Check out this article from Puck Daddy for a recount of one of the most infamous incidents in modern hockey history. Classic!

Posted by Nation's Capital at 7:38 AM