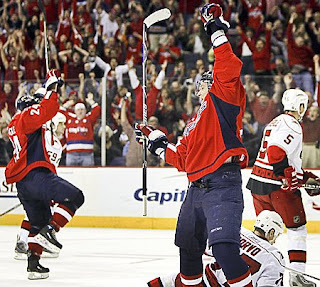 For all the ecstatic anticipation of great deeds to come in 2009, I still wonder if it can measure up to the lofty heights of the year that just concluded. It was so exhilarating as this team began to coalesce like clouds churning together to form a devastating storm. Even as the force of the storm lashes strongly into the new year, we can only speculate about the results. However, the results for 2008 are in...

And they are delicious.

This team came from decrepit jalopy status to become a high-performance street rod right before our eyes this year. I think it may have been one of the most incredible calender years I've witnessed in 27 years of being a Caps fan. Although the high point of that time came in 1998, the floundering follow-up performance at the beginning of the next season muted the memories of Juneau and Hasek by the end.

The "hunt-you-down relentlessly" attitude that Bruce Boudreau has imparted on this squad, along with all of the hardware and accolades that were handed out to the team is a refreshing change of pace from the dismissive mockery that we've become all-too-accustomed to. It's nice to be considered a team to be reckoned with.

Finally, in 2008, I could hold my head high and talk some trash.

I am very surprised together with your writing capacities furthermore utilizing the configuration and style of your individual site. Regardless, hold fast to the pleasant great quality writing, it is uncommon to decide an extraordinary online journal like this one right at this point. Check out best essay writing service for any help to make your essay perfect.